For months I hesitated to start a blog. For some time now I have this urge to share my ideas and adventures about what is happening in my daily job and my thoughts on testing, agile, mobile, usability and fun in work.  For a long time I didn’t thought I could find the time to blog about these topics. However, during the agile testing conference (Agile testing days 2012) I heard so many good idea’s that I needed something to vent. I have the hope this blog will help me and hopefully some followers to get an overview on the stories, adventures thoughts and idea’s I have or find on testing, agile, mobile and usability.

Let me begin with a short blog I wrote for the company I work for. I wrote this a while back, but It tells you a story about the very essence of the title of this blog: Serendipeddy. A concatenation of the word Serendipity and my name Eddy.

I wanted to introduce myself in this blog post by telling you about what I think is one of the great assets of a tester. Halfway through writing this blog post I was reading one of the last blogs of my colleague Nathalie. (It’s not on here blog anymore)  I discovered that what I think is the essence of being a tester was already written in the title of Nathalie’s first Dutch blog ‘Van Doemdenker naar meedenker’. Is it a coincidence that we wanted to write about the same topic in our first blogs?! I don’t think it is.

By referring and responding to Nathalie’s last blog I’m doing the exact same thing Nathalie did when she wrote her first blog. This is most certainly not a coincidence, but a choice. I consider it a tradition to start something new and honor my predecessor. So how often can a choice be, or result in, a coincidence?

As testers we might setup a test case based on error guessing. We can also be testing exploratory. Sometimes finding a bug using these techniques is considered a coincidence by other team members. Or even by the testers themselves. You could also say that experience and the gut feeling of a tester let him make choices that ‘by coincidence’ result in finding a bug.  The correct term for such fortunate discoveries would be: Serendipity. (The discovery of such a bug is often not considered ‘fortunate’, but for testers it still is kind of fortunate that they ‘beat’ the system.) 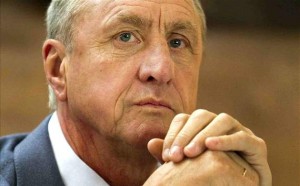 Serendipity brought science and society a lot of great inventions. Without serendipity many inventions like the microwave oven, penicillin, cornflakes, the law of Gravitation and LSD might never have been discovered. Without serendipity brilliant testers would never have found some of the most severe bugs. So when a business analyst or developer considers the bug you’ve found ‘a lucky shot’ and the behavior of the software ‘just a coincidence’. Confront him or her with examples of serendipity and the following quotes of our famous Dutch soccer hero Johan Cruyff:

Update: I found 1 other ‘spot on’ blogpost on serendipity and testing. The blogpost was also commented by James Bach.